Posted by Paul Hepworth on 2022-02-17tutorialretouching

The recent announcement of the Ricoh Theta X is exciting, but also I want to share my favorite tools for boosting your image quality regardless of the camera you're currently using. Topaz Labs' DeNoise AI and Gigapixel AI software are two of the best and most cost effective ways to take your 360 photos from, "wow that looks great" to "holy smokes, I feel like I could reach out and touch that ficus tree."

DeNoise AI does exactly what the name suggests. It removes noise from your photos. With 360 photography, it's difficult to completely avoid noise in your images. One of the surest ways to remind your viewers that they're not looking at reality, but instead viewing a photo, is the presence of noise. 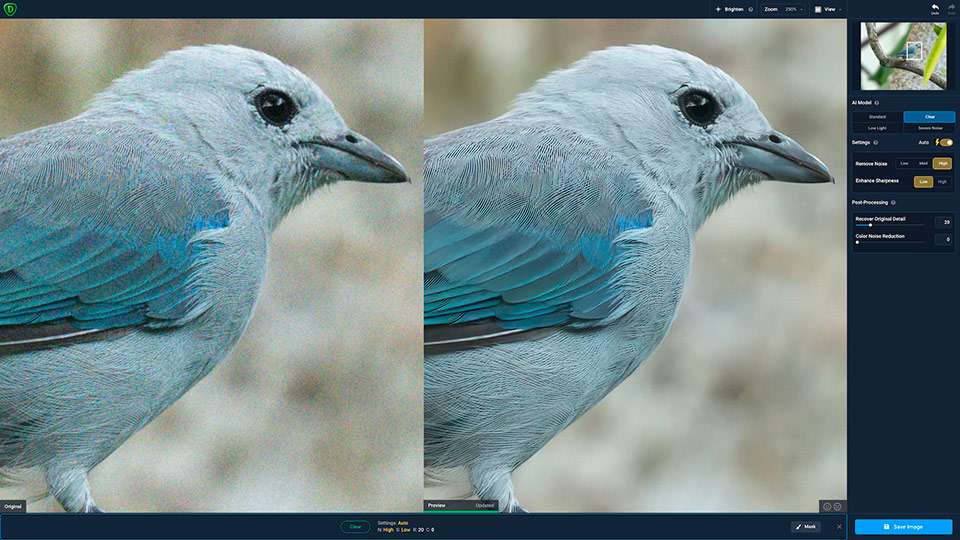 Denoising solutions in traditional photo editors, like photoshop, rely on blurring the noise out of images. There's a trade-off; you sacrifice sharpness to get rid of noise. With DeNoise AI, Topaz Labs uses artificial intelligence to analyze a photo and decide what is desirable detail and what is noise. It can then strategically target and eliminate noise while preserving detail — and it works like magic! If I had to recommend only one app from Topaz Labs' suite it would be DeNoise AI.

But I don't only recommend one app, I also strongly recommend upscaling with Gigapixel AI. This is the app that will really make your photos explode with realistic detail.

Gigapixel AI upscales your images to a higher resolution. Now why would we care to do this? Typically the only reason you might need to boost the pixel count is if you are going to print your photos to a large size.

Most likely, the resolution out of your camera is plenty sharp enough to look good on whatever screen most people are using. It's not until you try to blow up an image that increasing the pixel density matters, however… 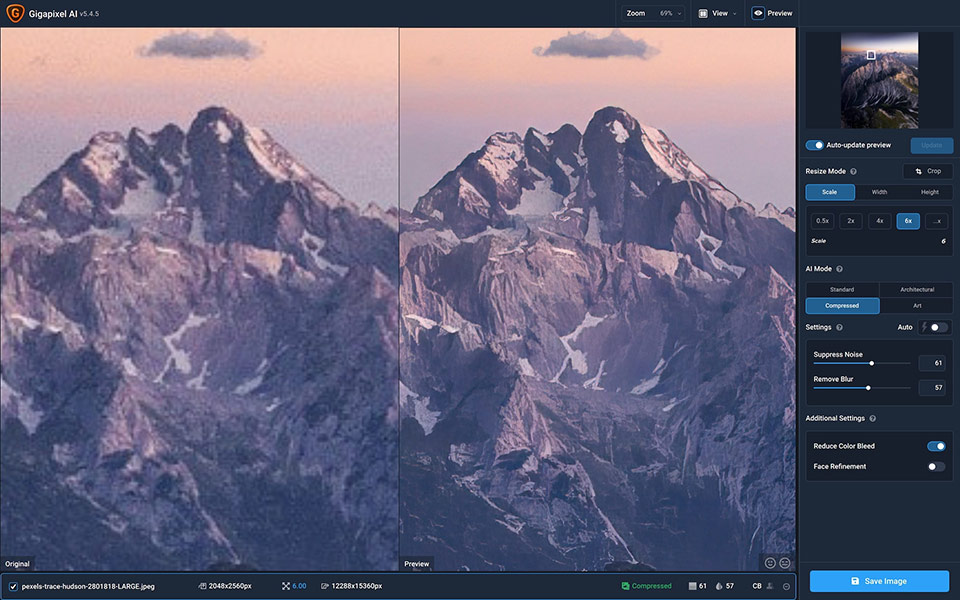 With 360 photography, we actually are blowing up our images. We're stretching and wrapping them in a sphere around the viewer. Of the 22 million or so pixels in your image, only a portion will appear on the screen at a time while the rest are wrapping out of view. This is why Gigapixel AI is such a valuable tool for 360 photographers. We're boosting the pixel density and sharpness of the stretched, blown-up visible portion of your 360 photos.

Like DeNoise, Gigapixel utilizes artificial intelligence to figure out how to effectively upscale the resolution of a photo while preserving and even enhancing detail. In addition to increasing the resolution, Gigapixel also adds an additional layer of denoising and sharpening.

The differences are best appreciated when viewing this comparison fullscreen.

Both of these apps are incredibly user friendly and you can get great results with the automatically recommended settings. Both can run either as plugins within Adobe Photoshop or Lightroom, or as standalone apps. Topaz Labs offers a great video tutorial for each of these apps:

Here are a few tips of my own:

All of Topaz Labs' software is available to try for free, so see for yourself what kind of improvements you can achieve. At the time of writing this (February 2022), Gigapixel AI is on sale for $20 off.