7 tips for 360 photographers how to shoot stunning panoramic photos 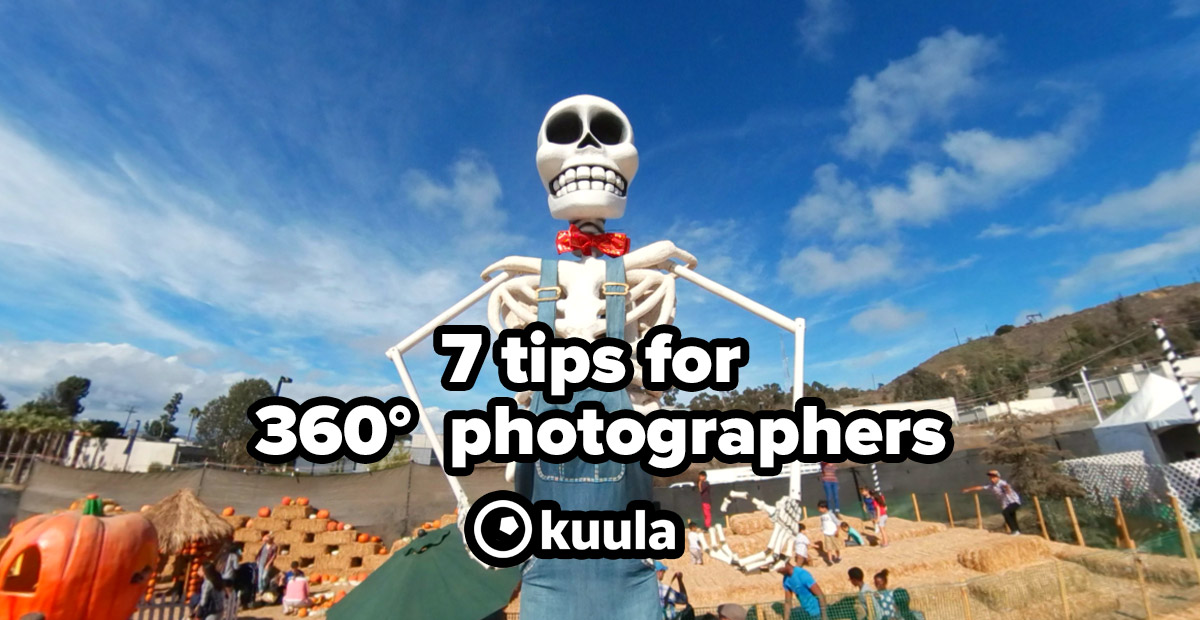 Virtual Reality is a hot topic these days & 360° photography offers an affordable and easy way to start your adventure with creating immersive content. Starting with photography for VR is as easy as buying a 360° camera and registering on Kuula.

At Kuula we not only build the tools to help you share 360° photos, but we love taking them ourselves. Based on our personal experience and looking through thousands of photos our users have posted, we compiled a list tips and tricks for every VR photography enthusiasts.

Don't have a 360° camera yet? In that case please our read our Getting Started guide first.

Selfie sticks have a bad name, but for 360° photography they come in very handy. A 360° camera takes a snapshot of everything around you, so if you hold the camera directly with your hand, your hand & fingers will show up in the photo in form of an extreme close-up.

We call it the "giant fingers" problem and a selfie stick is the easiest way to avoid this. The best selfie sticks are the telescopic ones - you can extend them as much as you need. Even a stick one feet long is enough to make your hand appear normal sized in the photo.

We use this model this model which is only $7 on Amazon, so it's very affordable.

A selfie stick is also great to get your camera higher up, above your head - some very interesting shots are possible that way. You can check the photo embedded above to see an example.

360° cameras typically work with a companion smartphone app. You can connect the app to your camera and control it that way. Since everyone has a phone these days and 360° cameras do not have enough space for screens and buttons, a mobile app is a good solve.

However, if you want to make a 360° photo with an app, you need to grab your camera, start the app, conect the app to the camera, hold the camera in one hand and the phone in another and only then... press the trigger. This quickly becomes a wearisome procedure. What if you want to be spontaneous, catch the moment?

If you want to take a photo as fast as you can, the self timer will is your best friend. Just press the button and move away from the camera (or move the camera away from you if you have it on a stick). In our experience a 2 to 5 second timer is perfect.

Both Samsung Gear360 and Ricoh Theta S have a self-timer function. It works better in Gear 360, because you can set it once and the device will remember the setting. With Ricoh you need to reset it each time you switch the camera on and off.

3. Keep the sun on the side

In regular photography, you'd typically avoid having the sun in the frame. If you are taking 360° photos however, the sun will be part of the shot no matter what.

When one of the lenses is facing the sun, this lens will receive much more light than the other. It often results in a halo around the stitiching line.

There's no way to avoid that completely. Especially Gear 360 tends to produce artifacts like lens flares and halos on the stitching lines. A good way to alleviate this issue is to make sure the sun is somewhere between the lenses and none of them is looking directly at it. Just rotate your camera to adjust this and remember that since this is a 360° photo, it doesn't really matter in which direction your camera is rotated - everything around you will be visible anyway.

As a general rule, the camera needs to be always in upright position. It shoudn't be tilted backwards, forwards or to the sides. The horizon line needs to be perfectly... well, horizontal.

You will see that this is easier said than done, especially when you do handheld photos! The good news is that the rotation/tilt can be adjusted in post production, but you need specialized software to do this.

If you use a selfie stick, make sure to tilt its head a bit, then extend the stick and try to hold it in a way so the camera is always in upright position.

Objects that are close to the lens might get cut or distorted in stitching. This problem is more visible with Gear 360 that has a bigger distance between the lenses, but Ricoh does it as well. Anything closer than one feet from the camera is at risk of being distorted.

If you want to do a closeup on an object and this object is relatively small, just make sure to place it in front of one of the lenses and not between them.

For the same reason, it's best to avoid putting the camera directly on a table or on the ground. Always try to use a small tripod or a stand. If the ground is far enough from the lens, there will be no visible stitiching errors.

Tripods are great for traditional photography, but they do not work well for 360° for a simple reason: most of them have large bases, designed to hold a heavy DSLR camera. If you attach a Ricoh or a Gear 360 to that, the base will be visible in the photo and it will be huge. This is a problem similar to the "giant fingers" issue mentioned above.

What's even worse, a lot of tripods have a handle under the base used to adjust the position and rotation of the camera. Those handles of course are visible in a 360° photo and they look just terrible, so avoid tripods that have them!

Instead of a tripod, it's better to use a monopod or even a simple light stand - anything that has the smallest head possible. We use a Neewer Light Stand which works well and is very inexpensive ($17 on Amazon).

The final tip that is less technical and maybe a bit controversial :) but we think it's important.

We all love to travel, visit new places, go to galleries, concerts or just hang out with family and friends. Taking photos is a great way to save those good memories for later. However, with how easy it is to make digital photos these days, we take way too many of them! Instead of enjoying the moment, we are constanly holding our smartphones looking for the best shot. I'm guilty of that as any of you!

I think 360° photos can help us with that. One of the best features of 360° photos is how much context a single picture has. You can literally have a selfie, a food pic, a landmark photo and all your friends around you - all that in a single shot! So instead of snapping hundreds of regular photos, take just a few 360°s and it will be good enough. Use the extra time to relax and enjoy whatever you are doing!

If you have any or if you disageee with some of the above :) please share your thuoghts in the comments section below!