Recommended tools to create a 360 render - Blender, MakeHuman and ZBrush 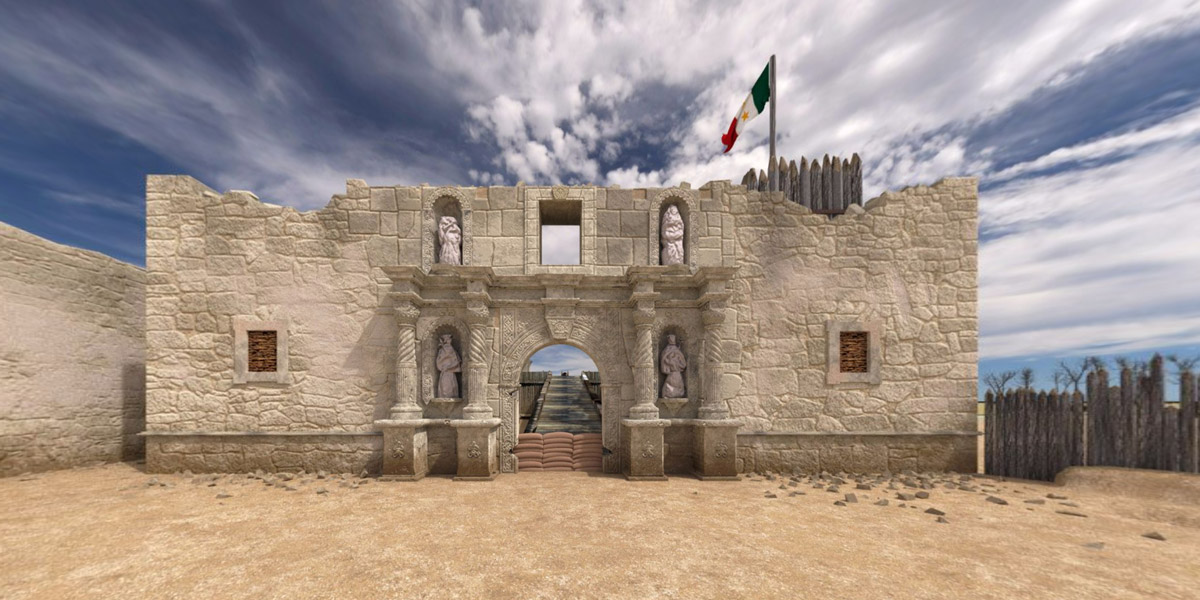 James Boddie created an awesome and historically acurate reconstruction of the Alamo Mission in San Antonio, Texas. The resulting 360 panoramas show what Alamo looked like back in 1836, just before the famous battle. In this article James gives us some historical background and explains what tools he used create the model and how he rendered it in 360 using Blender. Enjoy!

I became interested in computer graphics about 10 years ago. I decided to pick a subject for my studies that would challenge my abilities and provide some value to a viewer. Since I was also interested in history, the Alamo came to mind. Millions of people visit the Alamo in San Antonio, Texas each year, but it looks nothing like it did when the famous battle took place. I believed that I could find sufficient reference materials to make a historically accurate model of the 1836 Alamo and its surroundings. My goal was to use computer graphics to help people understand and experience this place in a new way. In doing so, the work would offer a wide range of technical and artistic problems for me to master including: modeling, materials, environments, rendering, animation, characters and special effects.

The Alamo Plaza as it might have appeared in 1836. The point of view is about 17 yards from the southwest corner of the Long Barrack (Convento). Created by James Boddie.

In 1835, settlers of the northern territories of Mexico staged a rebellion against the government.

The secularized compound had been fortified the previous year. The Alamo was surrounded and besieged for 13 days. Before dawn on March 6, Santa Anna launched a final assault with about 1400 soldados. The compound was far too large to be adequately defended by the approximately 200 Texians. In a battle that may have lasted about 45 minutes, the compound was overrun. All the Texian defenders were killed either in the fort, on the fields trying to escape or executed after the battle was over.

Santa Anna ordered the fortifications of the Alamo to be destroyed and he resumed the march north to find the rest of the Texian army. Six weeks later, he was defeated in a battle at San Jacinto near present day Houston and forced to grant independence for Texas.

Over time, the city of San Antonio grew around the old mission, erasing its original footprint. Today, only two buildings remain: the iconic church and the first floor of the convento or "long barrack." Both have been significantly altered from their 1836 appearance.

A work like this begins with references. I am fortunate to have a comprehensive source in the work of the artist and historian, Mark Lemon. His Illustrated Alamo 1836, A Photographic Journey, State House Press, 2008, provided dimensions for the main structures of the compound and a guide to their appearance.

Blender is my primary model creation and rendering tool. Adobe Substance 3D (Designer and Painter) are used to make realistic materials and textures. Trees and bushes are modeled in Blender using the Sapling add-on and grass and weeds are from the Grass Essentials pack from Blender Guru. I use MakeHuman and ZBrush for the statues and character models and Houdini for procedural modeling, water effects, crowd animation and compositing. Lighting is done with high quality HDR images from Hyperfocal Design.

The best media for me to present my work are still images and videos. Both provide the greatest accessibility to my consumers. That is, they work on multiple platforms and require no special apps and hardware or long downloads. They are simple to produce and minimize need for me to trade image quality for performance on the consumer's platform. 360-degree panoramas are ideal for presenting my work. A single high-resolution image can be viewed on all platforms without special client software while allowing the viewer to "interact" with the image as if they were in the scene - very immersive. My visitors love it!

This 3D model of the Alamo compound is based on: Mark Lemon's The Illustrated Alamo 1836, A Photographic Journey. Abilene: State House Press, 2008. Created by James Boddie.

Blender can easily render a 360-degree panorama suitable for viewing on Kuula or Facebook. Place the camera at eye level (about 1.7 m above the surface) and point straight ahead (X-Rotation 90 and Y-Rotation 0 degrees). The image should have an aspect ratio of 2:1 and high resolution. In the render panel, set the resolution to 6000 x 3000 pixels. Select the camera and in the camera properties panel, change the lens to Panoramic Equirectangular. The default settings should be fine (Latitude; -90 to 90 and Longitude -180 to 180). Render the image and save as a jpeg file.

Now you can upload the saved image as-is to Kuula, without any further edits. Once posted to Kuula you can share it on Facebook, Twitter and many other social networks by using the Share function available with every post. If you use the Facebook 360 sharing function on Kuula, the necessary EXIF data will be automatically injected. However, if you want to share the image on Facebook manually, then read on.

For Facebook to recognize the image, it is necessary to add metadata to the file. I use the on-line service of the eXifer to inject the metadata. Upload the photo and add the following fields to the exif:

The Ricoh Theta S is a popular 360-degree camera and for some panorama viewers, that is all that you need. Some viewers require the following additional data in the XMP fields:

Creating a model of the 1836 Alamo has been fun and rewarding project for me. I am excited to have a site like Kuula that lets me share my results to the world in such an immersive and accessible way.