Ruben Frosali is an artist from Italy, but now he lives in Japan. He is involved in improving and pushing his 360/VR imageries further, both artistically and technologically. In this article, he shares what techniques he uses to transform 360 images into amazing futuristic VR experiences.

I'm Ruben Frosali (RubenFro), an app/VR developer and designer from Italy but living in Tokyo for about 10 years now.

Since I was a kid I've always been interested in science fiction and space exploration, alternating chilly nights stargazing from the balcony to reading sci-fi books or watching the latest sci-fi movies.

Computers and technology have also fascinated me for as long as I can remember.

One of the most jaw-dropping experiences I'll never forget was waiting several hours to try one of the first VR systems.

It was the early 90s, the headset was incredibly heavy and the graphics very bare-bones with terrible refresh rates... but still, I was blown away and it was clear that one day I had to work on VR. You can see my first VR experience: here .

The idea of creating a world people could experience directly, not through a keyboard but physically turning around was extremely fascinating.

At the time technology wasn't there yet, but it looks like we're now finally close to VR becoming mainstream.

360 photography is something I discovered almost by chance and suddenly fell in love with the concept of being able to capture a photo you could actually explore in first-person.

I got my hands on a (very low-resolution) one-shot 360 camera last year and started experimenting with equirectangular editing and re-projections to create unusual non-360 views I keep sharing regularly on Instagram.

When I upgraded to a higher resolution camera, finally full interactive 360s became way more fun, satisfying and interesting... especially because now I could put a VR headset and jump into the scene.

The ability to experience 360 images directly with a VR headset and my passion for sci-fi was what pushed me to create a series of surreal and futuristic 360 manipulated images I call [impossible_structures].

In [impossible_structures] I use the 360 photos I usually take around Tokyo (a city with plenty of diverse and interesting architecture) and then edit, mirror, duplicate parts and re-orient the photosphere several times to create new kaleidoscopic geometries resembling spaceships, alien landscapes or new interdimensional structures.

A recent image of the series depicts a retro space station adrift in space. Ordinary objects of the original photo like street signs, windows, doors are still present and easily identifiable.

This image started with an interesting old building I saw walking around after work.

I took several 360 pictures and stack them together in Photoshop to remove people and other moving elements. 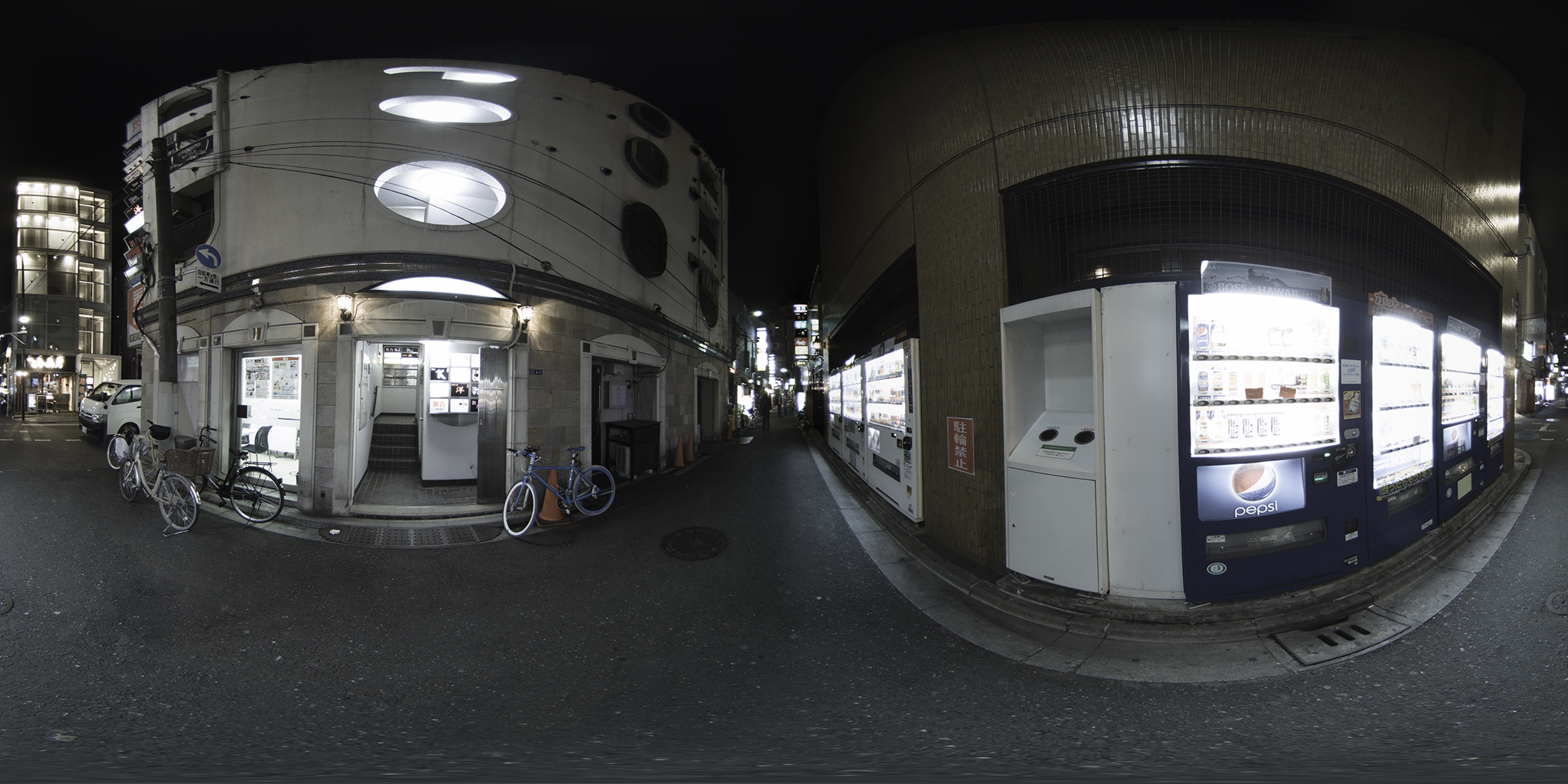 Then, I duplicated the main building and mirrored the image horizontally. 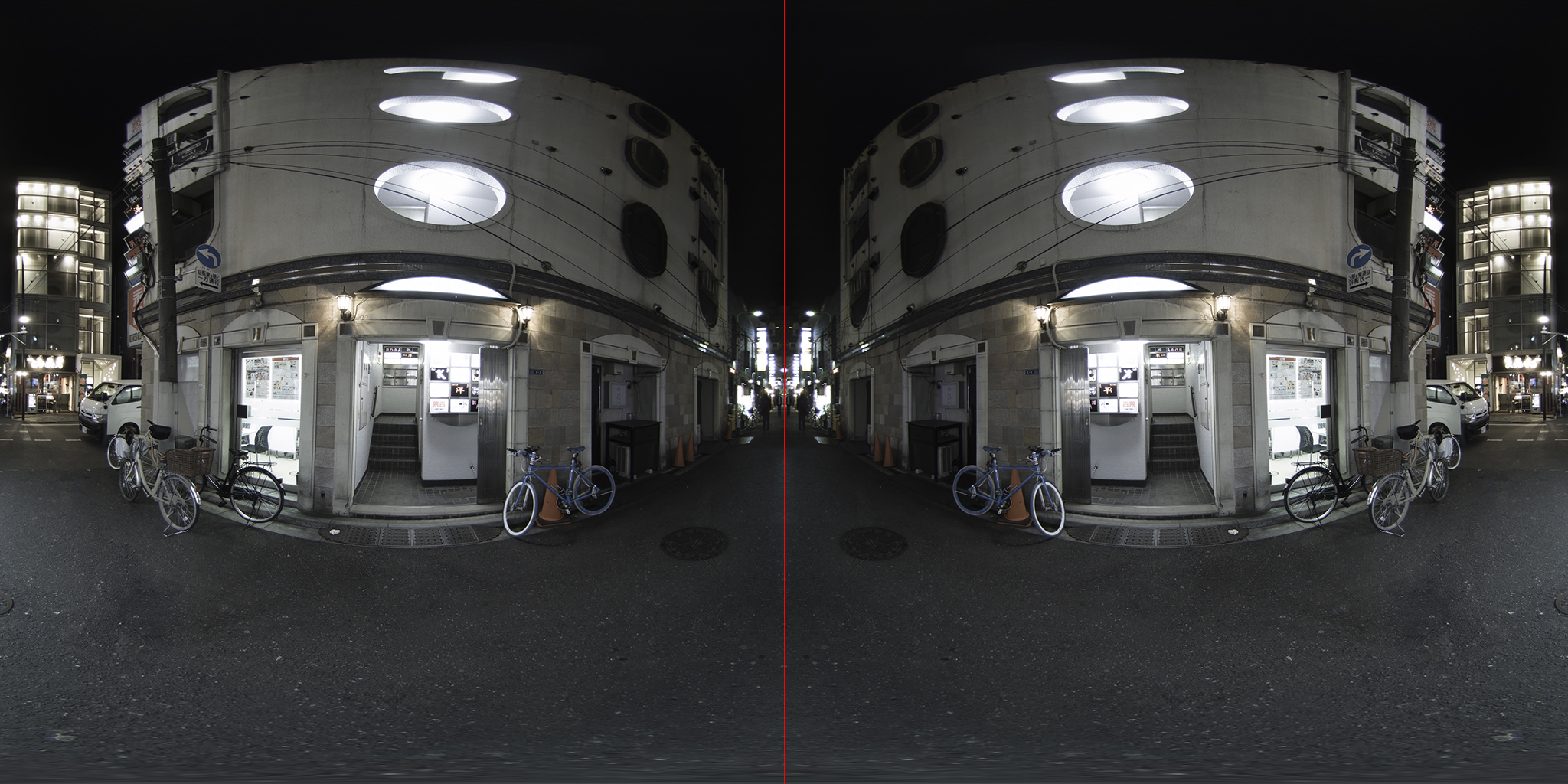 I did another mirroring, this time vertically, and at this point, I could already see the original image slowly mutating into the gloomy and mysterious space station I envisioned. 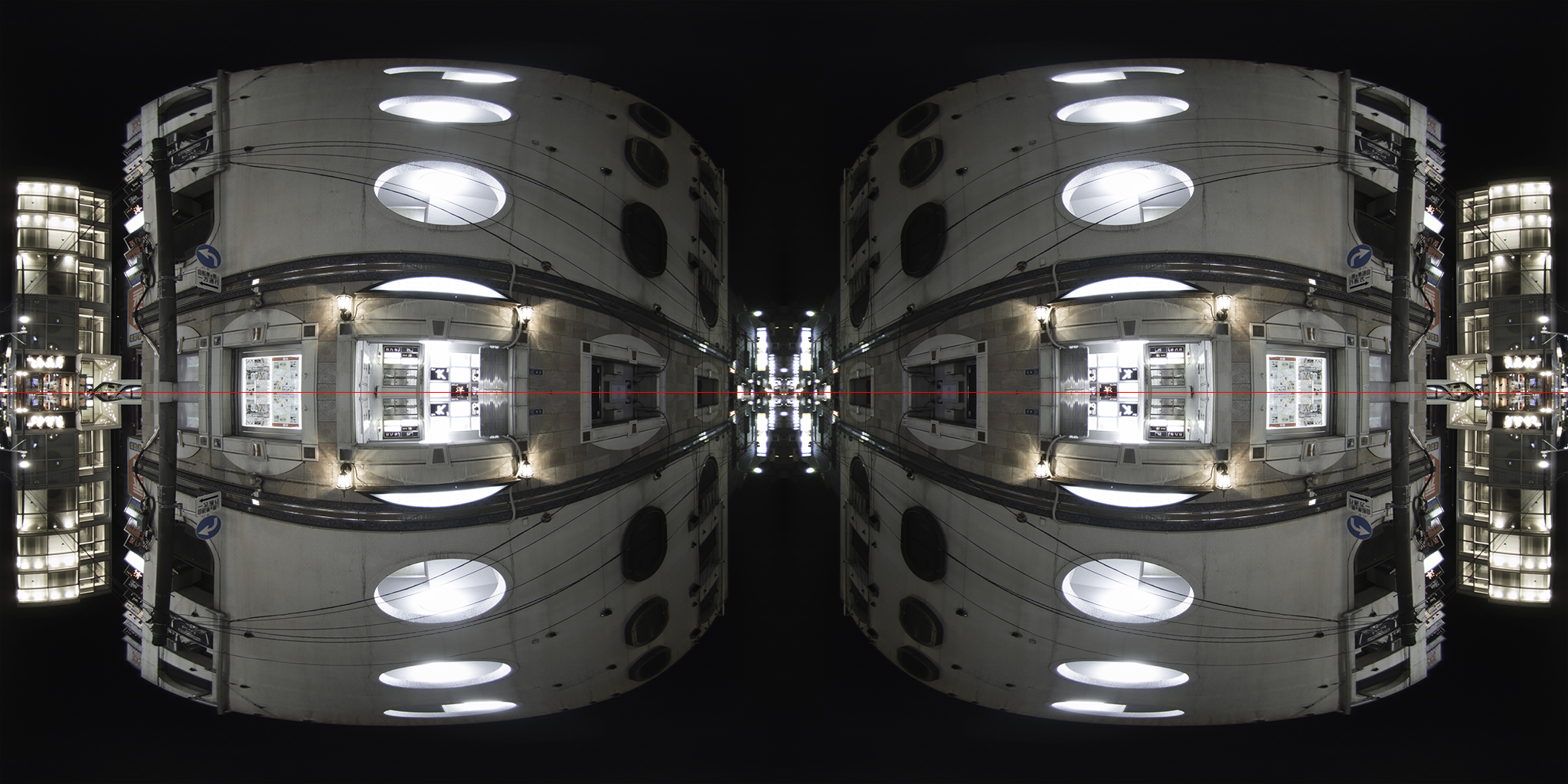 Using Hugin I loaded the mirrored image and then rotate it to bring the walls to a horizontal orientation. To "break" symmetry and avoid looking too repetitive, I flipped the top part of the equirectangular image. 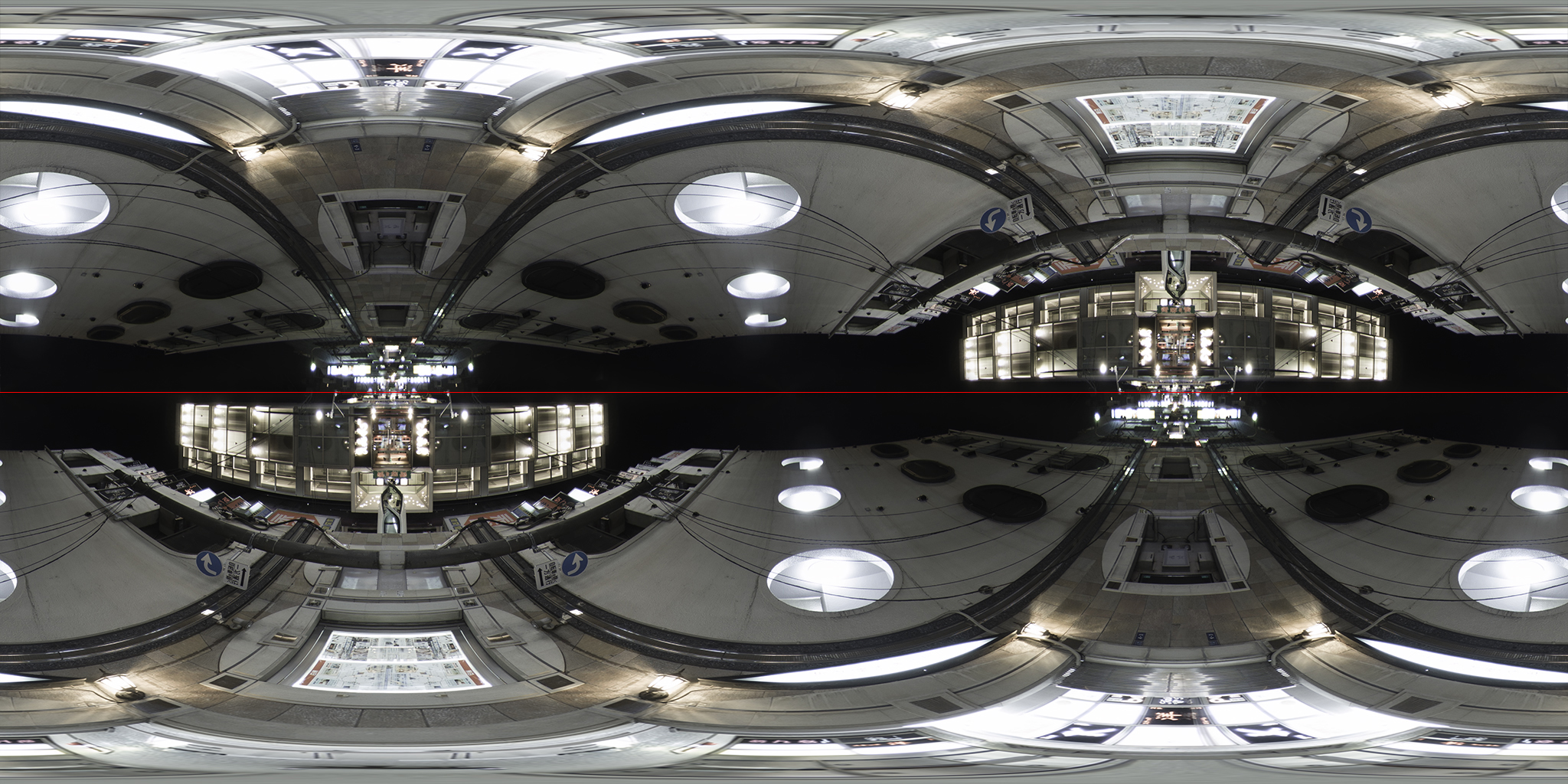 To create a more sci-fi atmosphere, I added some particles, haze, lights as well as a space-themed background. 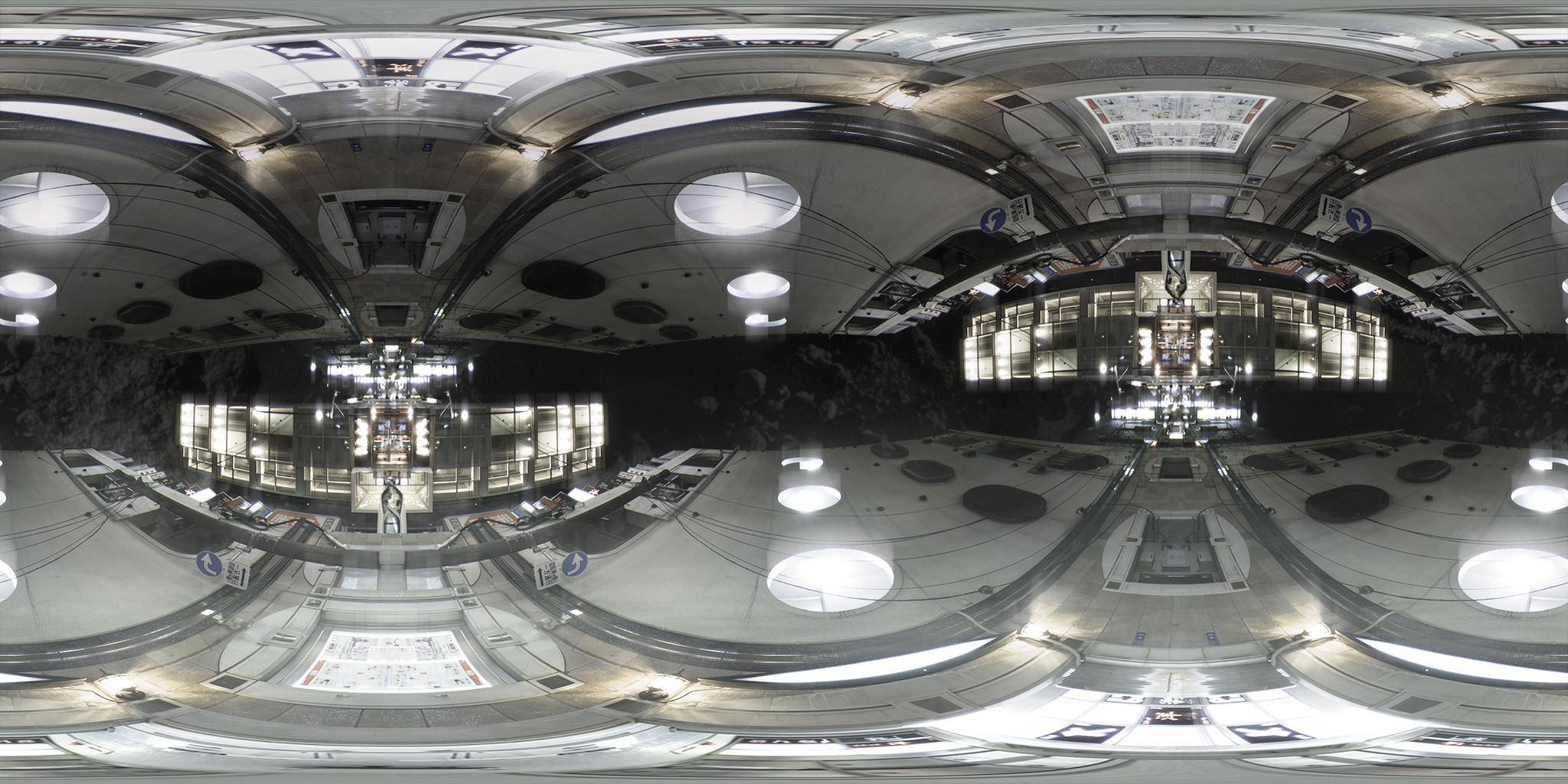 After that, a final color grading and general corrections in Lightroom and the image was ready to be uploaded to Kuula and other social networks.

Currently, my final aim is to focus solely on the development of interactive VR experiences in the coming years. 3D 360 with depth map, 6DoF, photogrammetry and the new stand-alone VR headsets from Oculus, Google and HTC, are some of the technologies I'm looking forward to be experimenting with. I'm sure that will help me create those immersive [impossible_structures] realities I always dreamt of and then, finally let people experience them firsthand with a VR headset.