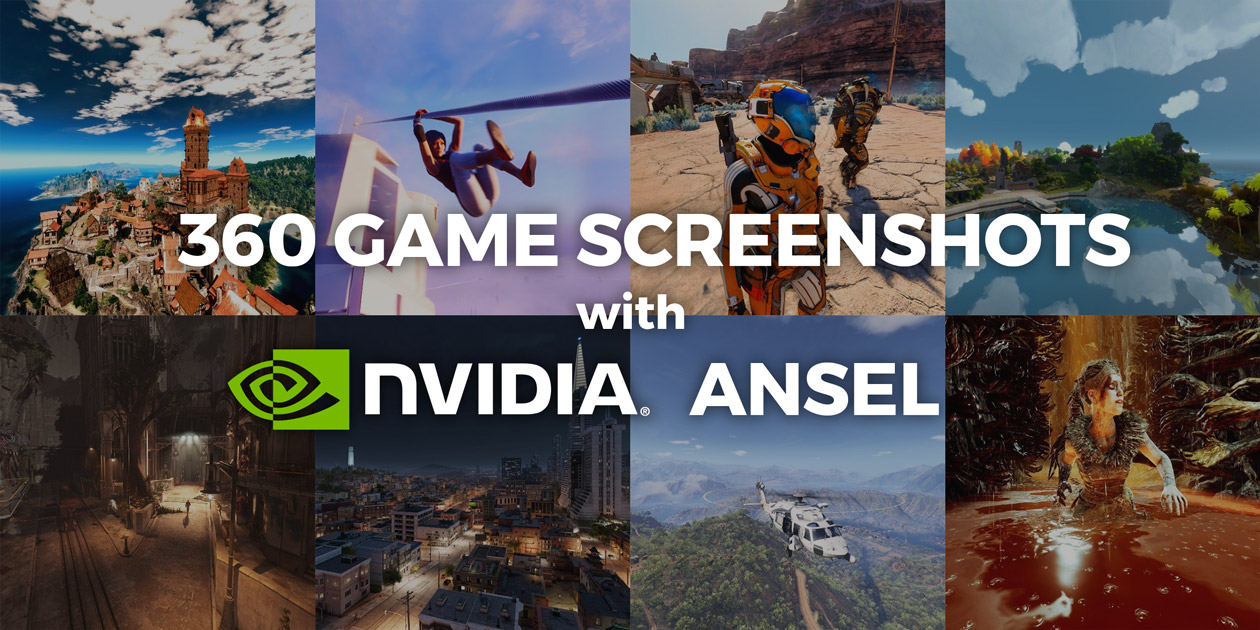 360 game screenshots are a relatively new thing. The technology behind them is called Ansel and it was released by NVIDIA in 2016. It allows gamers to capture in-game shots in 360 degrees using a simple keyboard shortcut. Since it's release, thousands of 360 game screenshots have been shared by Kuula users.

Modern PC games feature great visuals, beautiful and vast levels and dynamic game play. This makes it worth capturing the best moments and nothing looks quite as spectacular as a hi-res 360 screenshot!

We created a list of all PC games that support 360 screenshots that we know of - you can find it below, listed in no particular order. Are any of those titles among your favourites? If yes, you should capture and share 360 screenshots now!

The adventures Geralt of Rivia set against the backdrop of the vast expanse of the Continent are a perfect occasion to snap some beautiful 360 views. The game was originally released in 2015. Ansel capability was added in an update on August 2016. It's available to download from Steam or for purchase on Amazon

. Once you get the game, this article explains how to install and start using Ansel with Witcher 3.

Mirror's Edge city of Glass has a distinct modern feel and is inspired by cities such as Tokyo, Shanghai and Singapore. While running on the rooftops city of Glass, you will discover a lot breathtaking viewpoints and an amazing skyline - worth stopping for a moment and snapping a 360 screenshot! Grab the game from Amazon

or download a copy from EA Origin and you can start taking shots of Glass city right away!

360 game screenshot from The Witness.

The Witness is a single-player game in an open world with dozens of locations to explore and over 500 puzzles. The colorful level design is simple and detailed at the same time. According to the authors of the game it was inspired by "simplification from real-world photography, artwork, and the environments of the games Journey, Team Fortress 2, and Mirror's Edge". Grab your copy of The Witness from Steam and read this article to see how to start making 360 screenshots.

The recreation of San Francisco and the Bay area in Watch Dogs 2 is insanely detailed. Looking at some 360 screenshots uploaded to Kuula you may mistake them for photos of the real life city. One website actually included a screen from WD2 as part of their article on 360 photography of San Francisco - true story! Watch Dogs 2 is available on Amazon

and Steam. Grab your copy, become part of the DedSec team and help take down ctOS. Don't forget to take some 360 screenshots on the way!

The level design of the city of Karnaca, where most of the game play takes place, is inspired by XIX century paintings and southern European cities in Greece, Italy and Spain. It offers some spectacular views and an incredible level of detail. In this setting, you'll be playing as Empress Emily Kaldwin or her father, Corvo Attano, and attempt to reclaim the throne from the witch Delilah Copperspoon. The game is available on Amazon

Mass Effect is a game franchise that hardly needs an introduction. For this installment of the series, you will explore the Andromeda Galaxy in an open world environment. Playing as Scott or Sara Ryder you will be the leader of the Ark and help build Nexus - a space station that serves as a center of government and a living area. Mass Effect Andromeda is available on Amazon

The action of Tom Clancy's Ghost Recon Wildlands is set in Bolivia, in the near future. It is said to be the largest game level ever designed and features several different types of environment such as mountains, forests, desert, salt flats, with a dynamic weather system as well as a day-night cycle. You will play as member of the "Ghosts", a fictional elite special operations unit of the US Army fighting Santa Blanca - a Mexican drug cartel. The game is available on Steam.

The level design of Hellblade is truly hypnotizing. The game is inspired by Celtic and Norse mythology and depicts the personal journey of the main character through "a hellish underworld made up of Senua's psychotic manifestations of her reality and mind". The 360 screenshot above will give you a taste of that world, which is an experience you don't want to miss! Hellblade Senua's Sacrifice is available to download from Steam.

The football video game classic has had 17 editions since 2001. With the latest installment - PES 2018 - you get the chance to not only play the football with team composed of superstars such as Messi, Ronaldo or Piqué, but you can also snap the best action moments in full 360 degree glory! PES 2018 is available on Steam.

Tekken 7, which is the 9th instalment of the Tekken series, is a fighting game focused on one-to-one battles. It features 39 playable characters from different parts of the world. Tekken 7 can be downloaded from Steam or purchased on Amazon

360 game screenshot from Agents of Mayhem.

Agents of Mayhem takes place in a futuristic version of Seoul, South Korea. The objective of agents of M.A.Y.H.E.M. - which stands for Multinational Agency Hunting Evil Masterminds - is to defeat the supervillain organization called L.E.G.I.O.N. - the League of Evil Gentleman Intent on Obliterating Nations. The player can choose any three from 12 different characters to complete missions and explore the world. The game can be purchased on Steam or Amazon

360 game screenshot from For Honor.

For Honor is a combat game taking place a medieval setting. It features historical types of soldiers and warriors, such as knights, samurai, and vikings. Players can play as a character from three different factions, namely The Black Stone Legion, The Chosen, and The Warborn. Available on Amazon

Ark is an open world survival game. If features a large world - approximately 14 sq mi (48km2) big - populated with humans, dinosaurs and other types of creatures. In the game, you need to craft necessary items and weapons in order to survive. You can also tame & feed dinosaurs. The game has some beautiful, realistic graphics and even features a Virtual Reality mode. Ark is available on Steam.

Verdun is a game inspired by the Battle of Verdun that took place in 1916 in France during World War I. The game features a lot of historically accurate features such as weapons, uniforms and equipment. Maps are based on the real battlefields of the Western Front. It also includes detailed injury and gore modeling, so the player can get a very precise idea of what it meant to fight in the trenches of WWI (spoiler: it was horrible). Verdun is available for purchase on Steam.

Update: After we published this article, NVIDIA sent us this link, which has a list of all games supporting Ansel. So apparently there is way more games than we though. If your favourite game is not on our list above, take some 360 shots, upload them to Kuula and let us know!